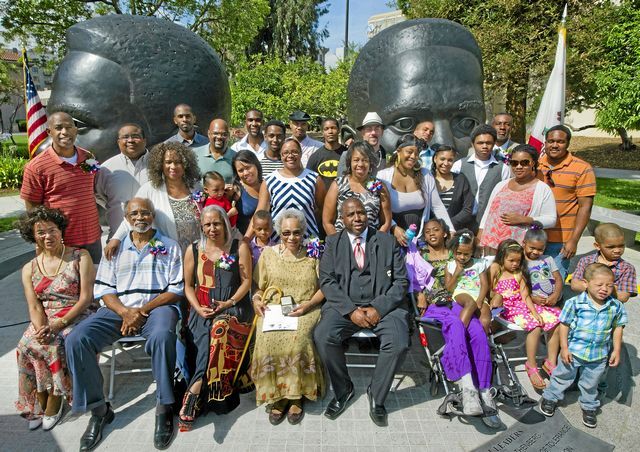 Article published by the The Pasadena Star-News.

Members of the Robinson family in front of sculptures of Mack and Jackie Robinson in Pasadena’s Civic Center. (Photo by Walt Mancini/Pasadena Star-News)

Racial injustice and architectural preservation are two of the perennial pivot points of Pasadena politics, and perhaps always will be, but rarely are they twinned as an issue.

But at a community gathering Sunday afternoon at a Craftsman house hard on the Arroyo Seco, I saw that when it comes to those who object to current plans for a new hotel incorporating the Julia Morgan-designed YWCA in the Civic Center, those who are passionate about African-American history and those invested in the City Beautiful movement’s impeccable public planning in Pasadena have found common cause.

That’s because speaker after speaker at the gathering lamented how the project would encroach on the space around the two sculptures honoring the brothers who were Pasadena’s greatest athletes, Mack Robinson and his younger brother, Jackie.

I list them in that order because for many in Pasadena, Mack, who was five years older and who lived many years longer, was by far the better known. He not only brought home a silver medal from the 1936 Olympics in Berlin — he stayed in town his whole life after that until his death in 2000. He worked as a streetsweeper for the city. He worked as a campus aide when I was at John Muir High, his alma mater, in the 1970s.

He was a friend, as it happens, of my mother’s, and I think she knew she was shocking any stodgy neighbors in the 1950s when she had him over to lunch in our then all-white northeast Altadena neighborhood.

Jackie became world-famous for breaking the color barrier in American major league sports when he joined the Brooklyn Dodgers; he, famously and understandably, never came back to Pasadena out of a deep resentment about the way he and his brother were treated by their hometown.

But now and forever they are remembered in a big way by the city that finally appreciated its own in the two large sculptures of their heads facing City Hall in park space across North Garfield Avenue.

Another famous Pasadenan and Muir alum, John Van de Kamp, noted Sunday that it’s said that Jackie’s visage is sited with his eyes looking east to Brooklyn, whereas Mack’s is actually gazing at City Hall, perhaps in wonder that a better job couldn’t be found for a University of Oregon grad than cleaning streets.

John was active in the civic effort to fund the sculptures, as was African-American artist Stanley Wilson, who was chair of the Pasadena Arts & Culture Commission at the time of the commission of the bronzes by sculptors Ralph Helmick and John Outterbridge.

And both told the preservationists and activists gathered Sunday that their main objection to the development of a large Civic Center hotel on the YW property is that the developers insist — as developers will — that they couldn’t possible make do with the original building footprint. No, in order to make the hotel “pencil out,” they must take additional city open space in the grassy area behind the Robinson Memorial.

The hotel as currently planned, and approved in concept unanimously by the City Council, wouldn’t actually be plopped down on top of the sculptures. But its walls and back door would creep up close enough to them as to be an insult, Van de Kamp and Wilson say.

It’s interesting to me how many local preservationists are a bit tepid about the Morgan building itself. I know that our greatest architectural historian, Bob Winter, is right when he notes that San Simeon, the YWCA ain’t. I guess I just like its simple Mediterranean lines and details more than others, and appreciate what our state’s first woman architect was able to do with a budget that was not exactly that of William Randolph Hearst. And I recall the interior spaces, with fabulous red Mexican tilework throughout, and with one of Morgan’s trademark indoor swimming pools — no Hearst Castle gold leaf or faux-Grecian statues — which has long been boarded up, as gorgeous.

But the preservationists who are now suing the city over the project — their website is www.savepasadenaciviccenter.org — say that “Myth No. 1” about the project is that it’s in real danger, since it’s city-owned after eminent domain proceedings.

Instead, “Why not insist on the best plan and the best team to get a good project that will last for generations?” they ask.