CCC featured in the Pasadena Weekly

The Civic Center Coalition was featured in Pasadena Now's cover story on August 13, 2015. Click here to see the article.

Plans to build a hotel in the city’s historic Civic Center District would encroach upon some of Pasadena’s most historic public property and destroy all available green space, which critics say has been given away for free to developers.

According to members of the Civic Center Coalition, (CCC) a six-story, 179-room hotel at the site of the landmark YWCA building will result in the demolition of green space and the removal of several trees in what is known as the Sister Cities Garden, located behind the Robinson Brothers Memorial in Centennial Square. The memorial consists of two giant bronze busts honoring the accomplishments of legendary athletes and civil rights leaders Jackie Robinson and his older brother, Mack Robinson. 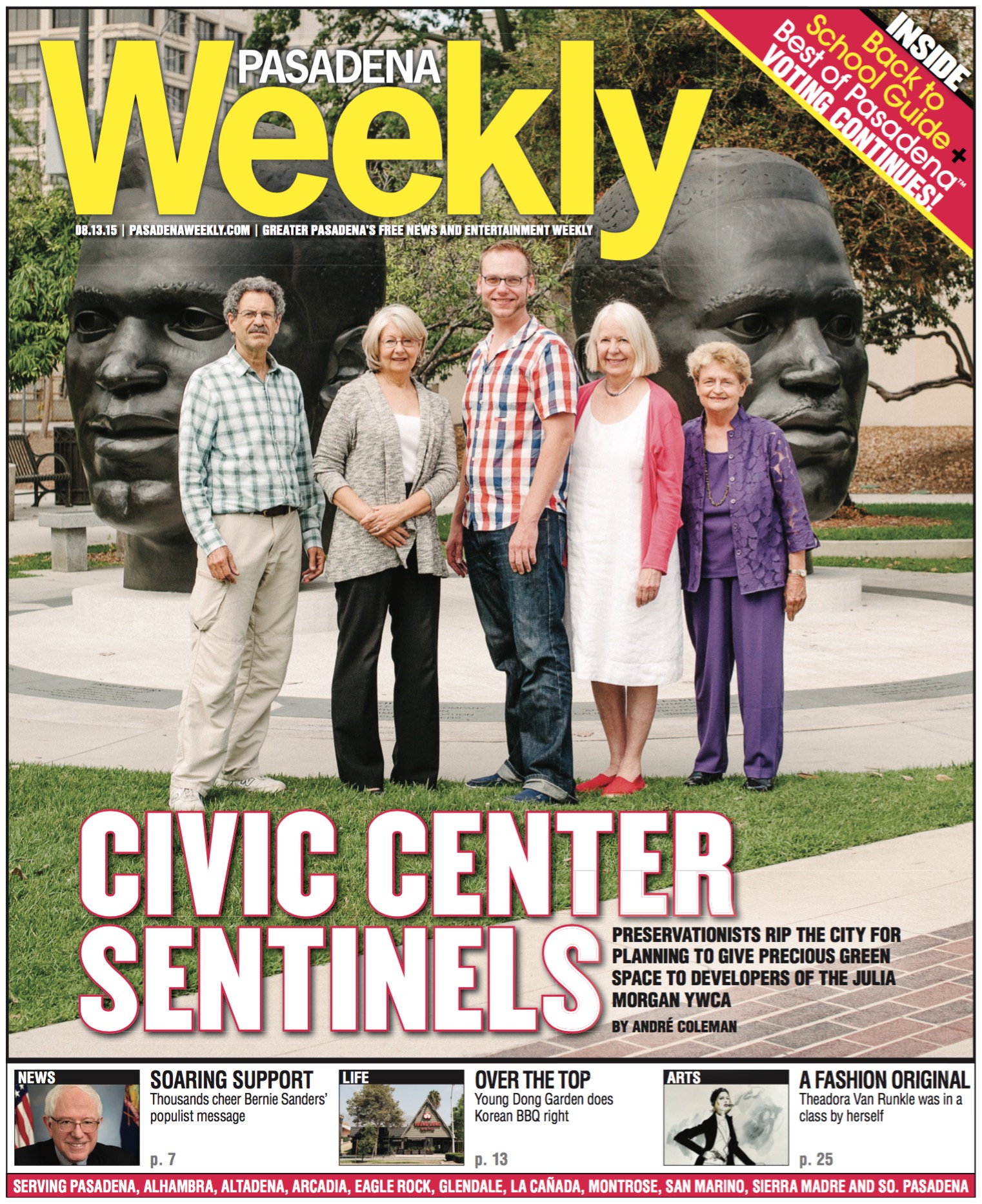 Under the current proposal, the hotel developers will be given that land and the memorial will end up just a few feet away from what will become the hotel’s service area.

In 2012, the city paid $8.2 million for the historic YWCA, designed by famed architect Julia Morgan and built in 1922, after seizing the property through eminent domain. The building is located in Pasadena’s Civic Center District which includes City Hall, the former Hall of Justice, both the YWCA and the YMCA buildings, the American Legion building, the Gas Co., the First Baptist Church, the US Post Office and the Turner and Stevens building, a former mortuary located on the northwest corner of Marengo Avenue and Holly Street.

“It just seems shortsighted to focus on an $8 million payoff when our beautiful City Hall and Civic Center [District] are at stake,” said Jonathan Edewards, founding member of the Downtown Pasadena Neighborhood Association (DPNA) and a current member of the city’s Transportation Advisory Commission.

“Pasadena derives much more long-term economic value, not to mention pride and emotional value from the gorgeous architecture and the garden setting than a mere $8 million,” Edewards said. “It’s really shocking that the city would be willing to trade our Civic Center away for so little.”

Under the current plan, the existing 48,260-square-foot structure, which has been vacant for many years, will be rehabilitated and an additional 87,342-square-foot, six-story building will be constructed on the site to create the 127,912-square-foot, 60-foot high Kimpton Hotel, according to the city’s website.

Parking for the new hotel would be valet-only; all parking would be off-site at existing developers of the Julia Morgan YWCA lots and structures nearby.

The city Design Commission held a public workshop on the project on Tuesday night, and the Planning Commission was scheduled to hold a meeting on Wednesday night.

“There are a series of drawings that are emerging now. That is what is coming to the Design Commission,” said Mayor Terry Tornek. “I want to see how that plays out. I take some of the blame for the confusion. I think the mission statement the council sent to staff was to save the building. That’s why we did it. That was first priority. The second priority was to get the money back and we should have been a third priority for a design statement which may not have been clear. That’s what’s come home to roost now.”

Councilman John Kennedy, who represents the area near City Hall, said he supported the hotel project, although he acknowledged that it is not perfect.

The current plan is also opposed by the Stewards of Public Land, a group of concerned residents dedicated to protecting and preserving parks and open spaces in Pasadena and in the Arroyo Seco Watershed.

“Although being done for a good cause — rehabilitating the derelict YWCA building, designed by the renowned architect Julia Morgan — the removal of this Civic Center public green space would be a sad loss to those living and visiting Downtown Pasadena and to the city as a whole,” the group posted on its website.

According to the Stewards of Public Land, city officials have pushed the project along in closed session, rarely bringing it before the public.

The issue last came before the Design and Planning commissions in 2014. At that time, commissioners recommended that Kimpton Hotel and Restaurant, which outbid six other developers to design the hotel, scale the project back.

Kimpton had submitted plans for a six-story, 96,000-square-foot hotel with 196 rooms, a restaurant and two bridal suites.

The nine-member board also recommended that the new hotel be completely detached from the original YWCA building.

On March 25, the Planning Commission held a public scoping session on the initial study for the project’s environmental impact report. The Planning Commissioners agreed that it was not appropriate to include the Sister Cities Gardens as part of the project. Members were concerned about the impact on the city’s civic “sacred space,” including the Jackie and Mack Robinson memorial.

“It’s sad and disturbing. Cities across the world, from LA to New York to Paris, are reclaiming land once lost to development for public space,” said DPNA Vice President Christine Fedukowski. “Not Pasadena. Instead, city staff is giving our Civic Center pubic garden spaces to a private developer for free.”

According to DPNA Board member and former Pasadena development administrator Marsha Rood, the CCC, like the Stewards of Public Land, does not oppose the hotel, but the devastation of the green space around it, under the proposed plan.

“With so many more people living in Downtown Pasadena we have to preserve and enhance what precious little public open space we have,” Rood said. “But to give away public open space in our beloved Civic Center to a private developer for free in closed-door meetings is going dramatically in the wrong direction.”

The building was designed in 1921 by Morgan, California’s first licensed female architect. Built the following year, the structure is listed on the National Register of Historic Places. The property has also been designated as a historic monument by city officials. The back end of the nearly block-long, two-story building faces Pasadena City Hall, which was built in 1927.

According to the Cultural Landscape Foundation, a Washington, DC-based nonprofit organization that seeks to provide an understanding of landscape architecture, the gardens are part of the 1923 voter-approved Bennett Plan.

Developed by the Chicago architecture firm of Bennett, Parsons and Frost, the plan centralized the city’s civic institutions within a single district where streets terminate at the most important buildings. Holly Street ends at City Hall, which was built in 1927. Garfield Avenue ends at the Pasadena Public Library on Walnut Street to the North and the Pasadena Civic Center to the south at Green Street. The district was listed on the National Register of Historic Places in 1980.

“The rehabilitation of the YWCA is an important effort that should not require the sacrifice of 90-year-old public open space right across from City Hall,” Rood said. “City staff needs to be much more creative than, as an assistant city manager put it, ‘throwing in the dirt to sweeten the deal.’”