Civic Gardens endangered by Over development. The Give-away of Our public land defies a vote of the people.

Who Is the Civic Center Coalition?

We are Pasadena residents who are passionate about our city. We are architects, economists, urban planners, real estate investors, historians, preservationists and community activists. We came together when we learned that the City Manager’s proposal for a massive hotel development on the entire YWCA block will destroy the civic center gardens along Garfield and Holly streets across from City Hall and encroach on the Pasadena Robinson Memorial.

What Do We Want?

In 1923, voters approved a bond measure which authorized funds for the purchase of land and construction of buildings that would become the Pasadena Civic Center – City Hall, the Central Library, and the Civic Auditorium, and the grounds and approaches that create the garden-like setting for these monumental civic buildings. The land chosen for the Civic Center was purposely set-apart from the commercial districts. It was a bold vision to make a place that was truly civic following traditional Beaux-Arts planning principles including:

These civic buildings in this garden-like setting has survived for nearly 100 years and continues to be internationally recognized as one of the best examples of Beaux-Arts architecture and the City Beautiful Movement of the 1920s.

Still, there is one missing (or perhaps troublesome) piece of the puzzle – the historic Julia Morgan-designed YWCA at 78 N. Marengo. Privately owned, in recent years it passed hands from the YWCA to speculative investors, By 2008, owned by an off-shore investor, the YWCA sat derelict and empty. Fortunately, in 2012 opportunity struck! The City was able to purchase the building (for $8.2 million) – finally our chance to fully realize the 1923 vision of the citizens and city leaders.

Having ownership, the stated first priority of the City staff was to recoup its $8.2 million investment. To do that, it prepared a request for proposals for the adaptive re-use of the YWCA. However, with no public input, City staff concluded the only way to do an adaptive reuse of the YWCA, was as part of redevelopment of the entire YWCA block, including the Civic Gardens along Garfield and Holly and encroaching onto the contemplative space of the Pasadena Robinson Memorial. Concluding the YWCA had limited or no financial value, as an incentive to developers, and with no public input, City staff decided to “throw in” the Civic Gardens.

Not until winter 2013, when the proposal of the developer selected by City staff was presented to the public at Design Commission, did it become evident to the citizens that city staff sought more than just the adaptive reuse of the YWCA. The proposal was to build a large hotel, a Kimpton Hotel.

Rather than an intimate, boutique "Kimpton" hotel like those developed by Kimpton founder, Bill Kimpton, the proposal called for a large 185-room hotel, towering over the YWCA and covering the entire YWCA block, including the Civic Gardens.

That project undermined the integrity of the Beaux-Arts architecture and City Beautiful Movement urban planning design (need Matt) of the Civic Center - the monumentality of the City Hall and its approaches, the public Civic Gardens, public open space, the acclaimed work of art set in contemplative space of the Pasadena Robinson Memorial. And it defied the will of the citizens who authorized the bond measure in the first place!

For various reason, including strong public outcry, the Kimpton proposal failed. In response, City staff issued a second Request for Proposals in the spring of 2019 and as of February 2020, is reviewing developer responses.

Before proceeding with any proposal, the redevelopment of Civic Center needs to respect the vision of the 1923 citizens and city leaders. Now is the time to engage the public in a robust discussion to fully realize that vision, one that has stood the test of time for 100 years, and will stand the test of time for the next 200 years. 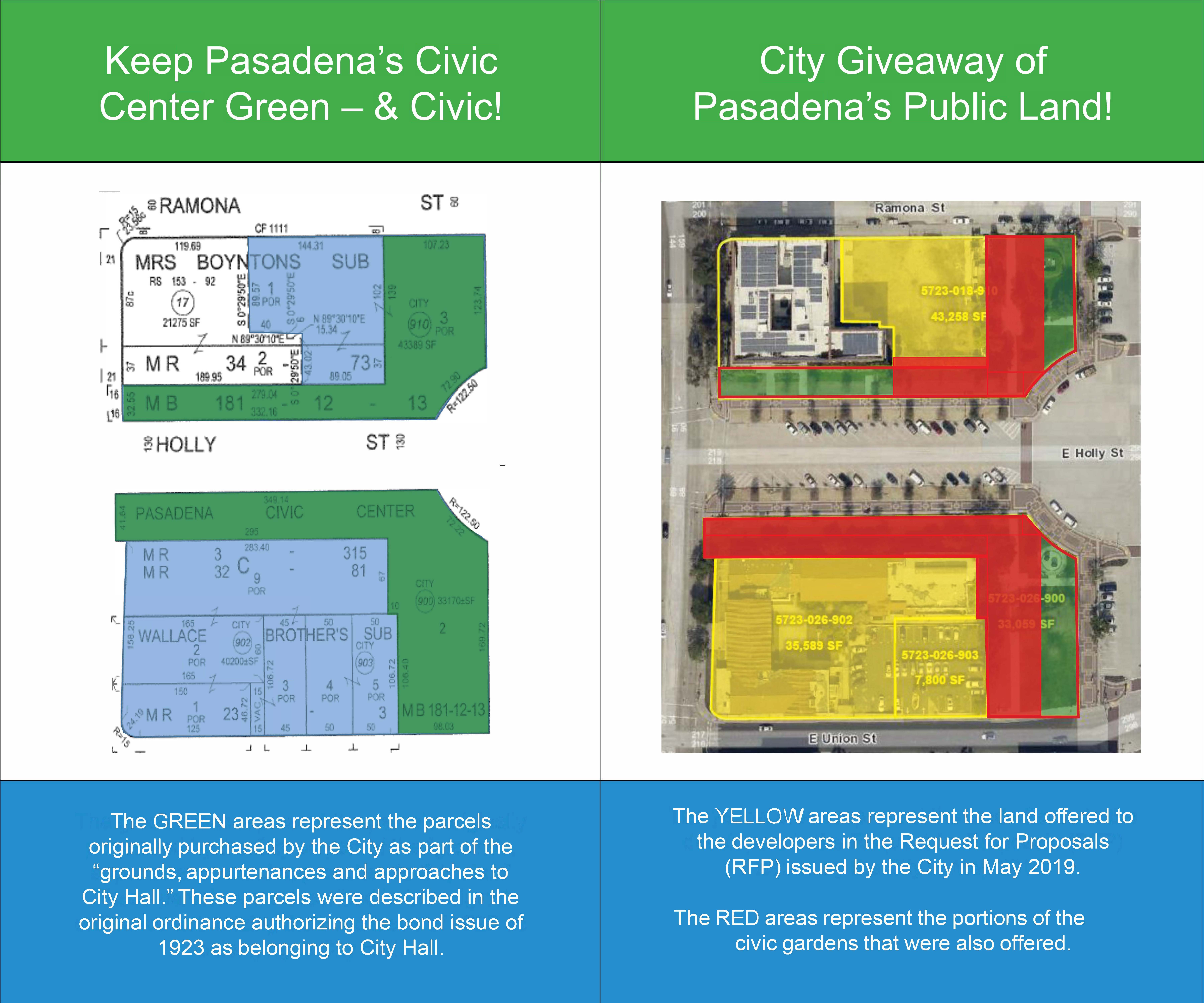 CAN WE COUNT ON YOU?     Please contribute!